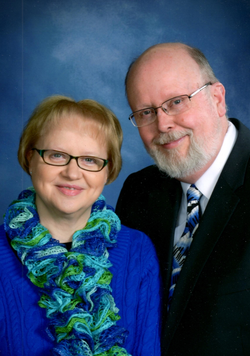 Mark Gronseth was born and raised on a farm in Britton, South Dakota.  He attended a one room rural school for the first seven years of school and then transferred to “town” school and graduated from Britton High School in 1971.  Mark attended Concordia College in Moorhead, Minnesota and graduated with a BA degree in Music in 1975.  Following college Mark worked at various agencies in the Fargo-Moorhead area.  In 1979 he was married to Colleen Swenson at Our Savior’s Lutheran Church in Moorhead, Minnesota.

In 1986 he began a twenty-two year career in church music with a move to Michigan to serve as Director of Music at Clarenceville United Methodist Church in Livonia.  Following a move in 1993 to Liberal, Kansas, he was Minister of Music and Organist at First United Methodist.    In 2000, Mark was Consecrated as a Diaconal Minister and Ordained as a Deacon in 2003, both in the Kansas West Conference.  In 2003 he and his family moved to Sioux Falls, South Dakota where he was Minister of Music and Organist at First Presbyterian Church until 2008.  During part of that time he was also Director of Music for St. Dysmas Lutheran Church, which is a congregation inside the South Dakota State Penitentiary.

In 2008, a new career began in pastoral ministry.  After two short interim positions as pastor of two churches in DeSmet, South Dakota and Wildflower Presbyterian in Sioux Falls, Mark was appointed to be pastor of the Wakonda, Irene and Viborg United Methodist Churches in July of 2009.  Mark received his Masters of Divinity degree from Sioux Falls Seminary in May of 2013.

In July 2013, Mark was appointed pastor of the Breckenridge and Fairmount United Methodist Churches.  Mark and his wife, CoCo currently reside in Breckenridge.

Mark and CoCo are the parents of two grown sons, Nick and his wife Jessica and their two children, Michaela and Alyssabeth, Carrington, North Dakota and Nate and wife Allison who reside in Fargo, North Dakota.